I have written before about my terrible fear of losing my parents to death. It started with an innocent remark by my mom that she would not be alive for the next centennial celebration in my home town. Then it grew when a classmate’s parents were killed in a car accident and the entire school had to attend the funeral without their own parents to help them process the deaths and give comfort.  As I looked at those two coffins as a grade schooler, sitting with other grade schoolers, terror was born that I would lose my parents. For most of my life, my desire was to die before my parents so that I didn’t have to live in a world without them.

After many years of counseling as an older adult, that fear was no longer terror but was still there.  Three months ago, my dad took his last breath here on earth and his first breath in heaven.  For years, we watched his health deteriorate due to his cancer and the many chemo treatments. We watched him over the six years of cancer go from an 80 year old man who regularly walked five or more miles a day to a man who could barely walk from his car to his apartment, using a walker. And at times, even needed to be pushed in a wheelchair.

For the last years, we watched him visibly weaken with every treatment he had.  He was determined to stay and take care of our mom who had Alzheimer’s. Each Christmas for years we were sure it would be his last but he fought and to our joy, made it yet again. But last Fall, my sister and I were talking about how weak he had gotten. She felt he wouldn’t make it to Thanksgiving, I felt he wouldn’t make it to Christmas. We were both pretty close. He died on December 9, 2019.

(Me holding my dad’s hand during his last stay in the hospital.)

He spent eight days in the hospital with pneumonia. I stayed with our mom. My sister stayed with Dad. After pretty much curing him of the pneumonia he went in with, the doctors determined he was dying. We were not surprised and yet we were. He had fought so hard that we weren’t expecting him to go so fast.

We made arrangements for him to be brought back to their apartment to live out the few days remaining. He never spoke again. For five days, from Thursday to Monday, we sat with him, we tried to meet all his needs, and we took care of Mom. I had gone home on Wednesday evening and come back Friday morning. As I was walking down the hallway to their apartment, I was thinking to myself that I just could not walk in that apartment. To see my dad dying, I couldn’t do it. But I was praying too and the Lord said He was with me and I would be all right. And as I walked in, there were some favorite cousins who gave comfort. God provides. 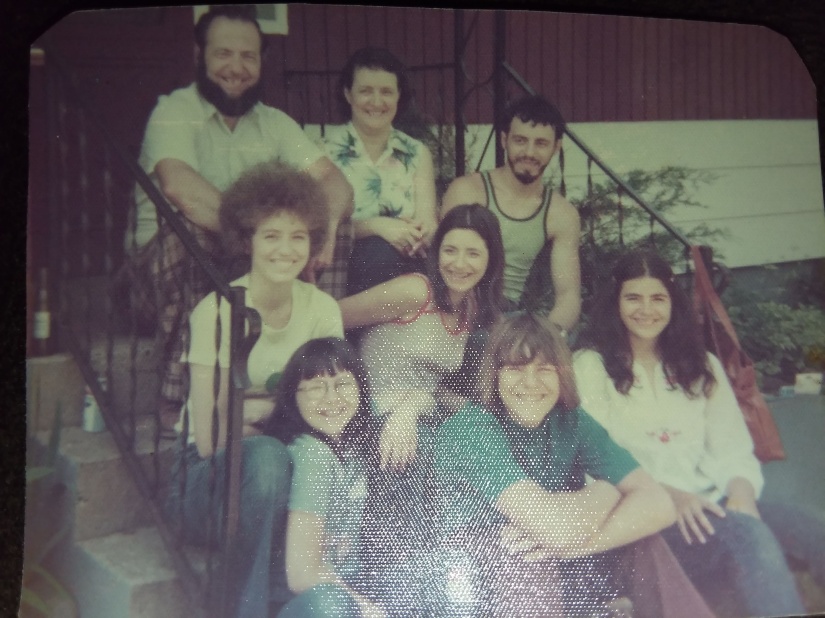 (Picture of a picture, sorry. And it’s old, but this is a great family to be part of. I am the fuzzy haired one below Dad.)

Over those days, we siblings had times of laughter, times of tears, times of peace and times of fear. We shared them as a family. There were always arms to hold the crying and shared laughter in the recounting of stories from our childhood. Numerous cousins came to say goodbye to Dad and we enjoyed their visits.

I knew the end was near that last day. But none of that old terror came back. Instead, there was a peace that truly passed understanding as stated in Philippians 4:7, “And the peace of God, which transcends all understanding, will guard your hearts and your minds in Christ Jesus”. There was sadness for sure, but not the panic that I wouldn’t survive his loss as I had lived with most of my life. My heart and mind were secure in Jesus.

From the day I went to help, I prayed every day, “Lord, be beside me and give me your strength for whatever is coming.” “I can do all this through him who gives me strength”, from Philippians 4:13 was often on my mind.  Like Paul who penned these words while in prison, a man who had been imprisoned several times,  beaten, and whipped and yet found a way to be content no matter what his circumstances,  so had I. The same power that gave Paul peace, gave me peace. The same power that gave Paul strength gave me strength.

(So many talked about how great my dad’s smile was.)

When Dad took his last breath, I cried and I cried hard. But I didn’t fall apart. There was no terror, no question of surviving his death.  Because I was being held by heavenly arms and human arms. My siblings and I shared some of the best moments of our life in that apartment taking care of our parents, walking with Dad on his last journey on earth. We have always been close, but after those days, I think we would all say we are closer than ever.

I did things in those days I never thought I would have the strength to do. In fact, one stands out more than any other. Hours before my dad died, I had told my sister that I couldn’t be in the room when they wheeled his body out. I just felt it would be too painful and final to watch him being removed. Dad died about 9:00 p.m. Hospice and the mortician came around 10:00 p.m. Most of the family had left while Dad’s body lay in the apartment.

I felt I had to stay. Something inside just told me not to leave yet. Just my older brother and I were there at the end. He and I waited in the hallway while they prepared his body. When they wheeled his wrapped body out, the Hospice nurse took the front and the mortician the back of the stretcher. My brother and I each walked alongside the stretcher, one on each side. I felt like we were his honor guard. The two oldest children walking their dad out for the last time. It was a privilege. The last thing we could do for Dad.

My brother and I stood together as they placed his body in the van. I squeezed Dad’s toes for the last time and said goodbye. We watched as his body was loaded into the van, my brother’s arm around me as I cried and his head leaning on top of my head. We watched together as the van drove off until we couldn’t see it anymore.

Not only had I been there when they removed Dad’s body, I escorted it out. There is no way I could have done that in my own power. I did it in His! And it became a treasured memory of my dad and my brother both.

I miss my dad every day. I don’t cry every day. There are days when it’s easier and then when suddenly I am full of grief. But I’m OK. John 10:10b has a verse that I love and am holding onto right now, “I have come that they may have life, and have it to the full.”  My dad is gone but I still have life, something that for decades I didn’t believe I would have following the death of a parent. Not only do I have life, but that life is pretty darn good.

I know there are worse things than losing your dad. I can’t imagine losing my husband. Or being given just a short time to live. I don’t know what you are facing, but I do know you aren’t facing it alone. I don’t know how much strength you have on your own, but I know how much you have when you walk with Jesus, more than you will ever need. If you don’t know Jesus as your Savior, will you please consider getting to know Him? Start with a simple prayer asking Him to show you who He is. Then let Him lead you to a place of peace and strength, of love and joy.

He says in Jeremiah 31.3, “I have loved you with an everlasting love” and in Hebrews 13:5b, “Never will I leave you nor forsake you.” I felt His love and presence throughout one of the hardest events I have ever experienced. Because of that, I survived and will no doubt thrive.

Six months and one week after we stood at Dad’s side as he took his last breath, we stood at my mom’s side as she took her last breath. Six months and one week later, my brother, sister-in-law and I walked our mom out of the hotel room we had spent her last five plus days in and to the mortuary vehicle that would take her away for the last time. We thought Dad’s death was hard. Mom’s was so much harder. In many ways because of Dad’s death. There were so many similarities that, for me, I felt like I was experiencing Dad’s death all over again. The trauma of those days came roaring back.

As soon as the ambulance drove up with Mom, I was sobbing. For a little over five days, we kids walked the path of dying with her. Giving her medications to relax her and calm her pain. Turning her over to avoid more pain. Holding her, loving her, kissing her, all while watching her body slowly die. This time more of her care was on our shoulders since because of Covid, we couldn’t get all the help we had when Dad was dying. This time we made the decisions on medication, we gave the medication, we determined when to turn her and we cared for her as best as we could, all the time wondering if we were doing it right. She couldn’t communicate with us. We couldn’t ask her if she was in pain.

It was the longest five plus days I have ever spent. I struggled afterwards with guilt, could we, should we have done more, given her more narcotics, was she in pain? Question after question. Did we fail her, did I fail her in some way? Finally, I sat in prayer, asking the Lord and His words came to me, “She passed in just the way I planned for her to pass. It’s Okay, let it go.” And again, that peace came.

We had the strength to do what we had to do. We had the siblings again, to hold and to share laughter and tears with. The Lord provided and He took a suffering woman home, He blessed her with eternity. And He blessed us with a wonderful mom and the knowledge she was with Dad and neither was suffering anymore. No more cancer, no more Alzheimers. What more could we ask for? Just strength to go on and He is giving that as well.